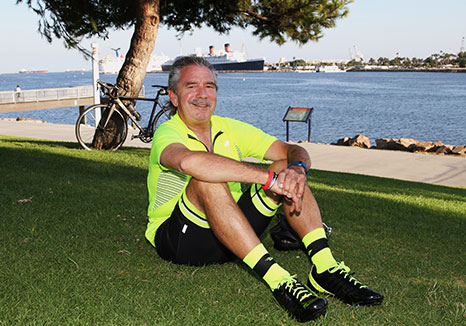 Johnny, 55, has been a collegiate and high school soccer referee for the past 34 years. But in 2016, heart failure nearly put him on the sidelines.

Johnny was first diagnosed with heart failure after an echocardiogram (EKG) revealed he was having a severe heart attack known as a “widow-maker.” A subsequent angiogram showed that his ejection fraction — the percentage of blood that leaves the heart each time it contracts — was only 14%. A normal ejection fraction is between 55% and 70%.

Doctors tried a number of interventions to treat Johnny’s heart failure, including stents and an implantable cardioverter defibrillator (ICD), but a few weeks later, he went into cardiac arrest. He was immediately placed on the heart transplant waiting list, but doctors feared he wouldn’t survive long enough to receive one. With time running out, doctors approached Johnny and his family about the SynCardia temporary Total Artificial Heart (TAH).

On Feb. 1, 2016, doctors at Cedars-Sinai Heart Institute in Los Angeles removed Johnny’s damaged heart and replaced it with the SynCardia TAH, restoring blood flow to his body and allowing him to begin his recovery from heart failure.

Just a few weeks later, Johnny was stable enough to be switched to the Freedom® Portable Driver, a smaller, lighter pump for the TAH, which allowed him to be discharged from the hospital to wait for a matching donor heart at home.

Six months later, Johnny received the heart transplant he’d been waiting for. Since then, he’s become a grandfather — a milestone that, prior to the TAH, he wasn’t sure he’d live to see — and resumed his role as a soccer referee.

Johnny’s motivation is his heart donor’s family, whom he hopes to meet one day. “There are no words I can say to thank them,” said Johnny. “They lost their 22-year-old son. Everything I’m doing, I’m doing for them. I really hope to meet them, so I can let them know that their son is still alive in me, so they can feel his heart beat.”